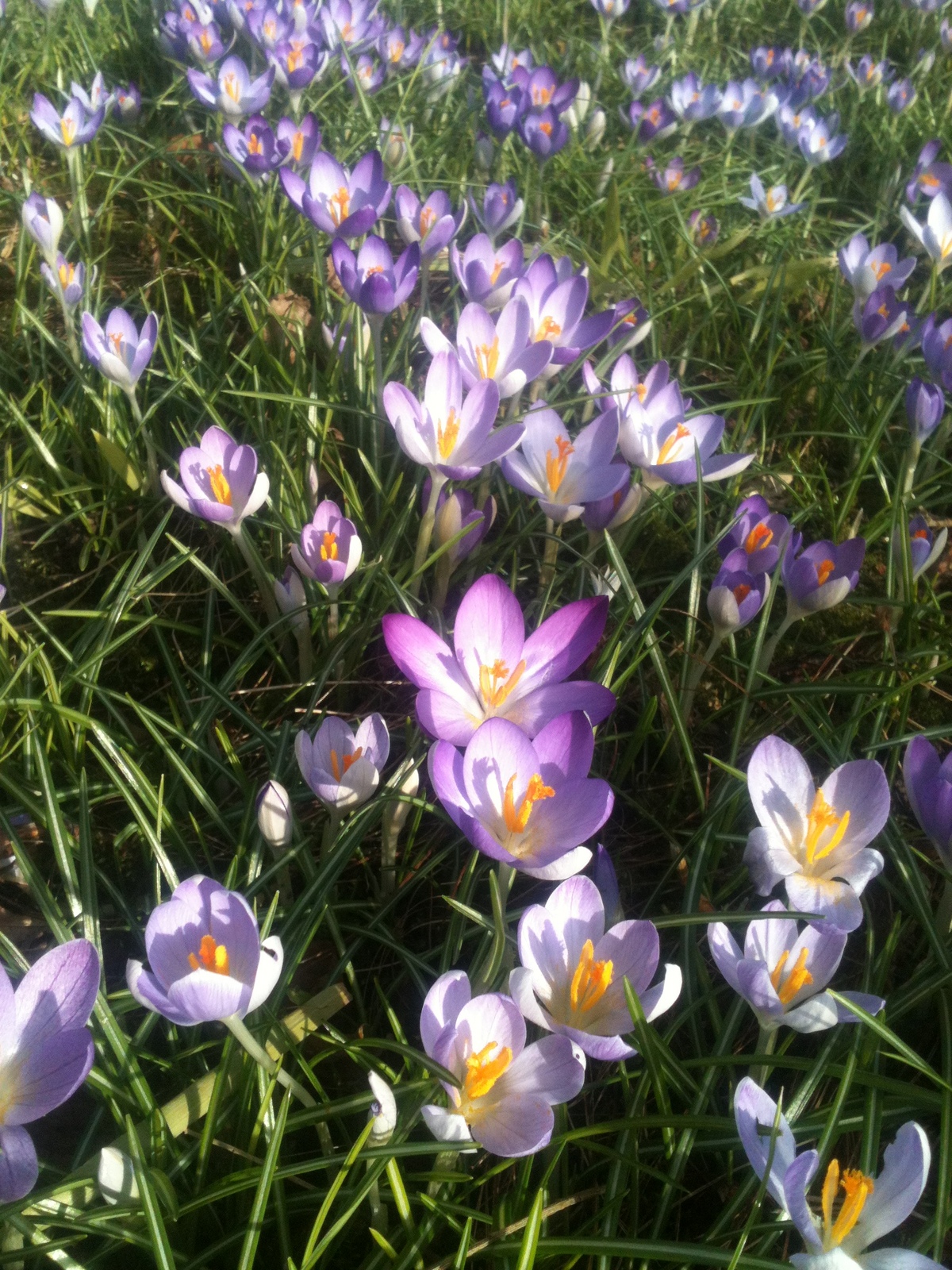 Sunday 3rd of March, sunny but cold.  Crocus day at local Botanical Gardens with Nurseries in attendance, I paid a visit….

The Naturalistic Crocus displays looked good, helped by the sunshine, and the Snow Drops put on a show.

Purchased for £15 from my friend and nursery owner who ran a plant stall on the day, it’s a nice big bulb & lovely big plant, its cheaper than those of the same name on E-bay and I’m supporting British Growers.

(and I’ve always wanted one)

I also purchased 3 different coloured flowering Hepaticas, I’ve no experience of these plants and they were on offer for a reasonable price. So I’m going to see how I get on with them.

I also bought a decent sized  Melianthus major commonly known as the honey bush, for £4, I managed to kill one off a few years ago as they are not that hardy and need lots of frost protection.

After I got home I placed my new purchases, except for the Melianthus onto my newly put-together Aluminium Greenhouse Bench.

The Melianthus is staying on the kitchen windowsill for now.

A bit of gardening, followed by re-potting my Auriculas on the advice of my nursery owner -friend, I also potted up some new Dahlia tubers I had treated myself to.

I picked ones that all look quite different to each other, I also picked up a packet of Physalis – Chinese Lantern, however it appeared to consist of 5 bits of shooting roots in some damp peat. I’ve potted them all up in 1 pot and will see what, if anything, appears.

Finally, a packet of 15 bulbs of Zephyranthes, I have no idea what they will be like, except they look like nice pink flowers on the packet cover.  These were potted up together in 1 big pot.

Some extra Sweet peas were sown, Lettuce seeding’s purchased for 50p for pot of about 50 seedlings were pricked out into cell trays.  Dahlia pots placed onto staging to keep them away from slugs. All tucked up in my Greenhouse.

I even managed to mow the lawn for the first time this year, so a very Productive day was had, and I was nurturing the backache to prove it.

A few days later the weather got cooler, but the Frogs did not appear to notice.

Then we had a few days of Mist, drizzle then finally some decent Fog.

I attended the first Alpine Garden club meeting of the year in the week, as the Feb meeting was called off due to a blizzard, I won a pot Primula in the Raffle and agreed to have my name added to the to the Committee list.

Yesterday (Saturday 9th March), should have been the Loughborough Spring Alpine Show & Plant Sale and I expected to make many purchases and take lots of pictures, mostly for this blog, however on Friday I discovered the Show was off due to a major Gas Leak at the venue which is a school.

Very disappointing but safety needs to come first I guess and engineers had taken over the building to solve the problem before the children go back to school on Monday.

Today, Mothers Day… it snowed.. and got very cold.

It’s barely got above freezing all day.

It thawed a bit, and I hid in the greenhouse and sowed a few more seeds from my allocation from the various seeds lists I can access due to being a member of the Hardy Plant Society, The RHS and The Alpine Garden Society. These were the seeds that needed a cold spell to help with germination, so they have been in a jam jar in my fridge for a couple of months.

So winter has returned, my show was cancelled and my feet are cold, here’s hoping the  next few weeks warm up more as I’ve got quite a few flower seeds I want to get sowing soon.

8 thoughts on “Four Seasons in one week”